In a moderately surprising move, New York’s main Planned Parenthood abortion facility, the Margaret Sanger Health Center, has decided to remove their founder’s name because of her “harmful connections to the eugenics movement.” They are also looking into removing her name from a New York street, Margaret Sanger Square.

It’s only moderately surprising because the abortion giant was forced to reckon with its racism (in New York, coincidentally) when their CEO was ousted for financial mismanagement, abuse, and (you guessed it) racism. Over 300 of the abortion facility’s employees and supporters signed on to a letter detailing the CEO’s bad behavior, which led to her removal and Planned Parenthood’s admittance that it’s time to deal with their past. Alexis McGill Johnson, Planned Parenthood CEO, said at the time, “We must ensure that Planned Parenthood workplaces are safe and supportive environments for patients, volunteers, and staff at all levels. This includes reckoning with and addressing directly our own internal and structural racism — both historic and current — which harms Planned Parenthood staff, our Black staff in particular.”

Personally… we aren’t really buying this transformation and repentant facade. On its surface, it does sound like a positive step. But Planned Parenthood has lauded Sanger as a hero for over 100 years. And they’ve done her work as a targeted eugenic machine for the past century, too. Thanks to their diligent work of directly targeting minority communities, they’ve succeeded in making abortion the number one killer of Black Americans and in many places, have caused the Black community to drop below replacement rate (which means they’ve succeeded in shrinking the overall Black population). Some fast facts:

Considering the popularity explosion of Black Lives Matter and the current blinding spotlight on race issues, it’s appropriate and expected that Planned Parenthood felt they could no longer look the other way about their origins. But “outing” themselves is a brilliant strategy. Instead of waiting around for someone else to do it, making the first big move allows them to control the narrative and come out looking good. Never mind of course that pro-life organizations have been calling them out for decades.

We’re confident making an educated guess that Planned Parenthood’s renouncement of their eugenic heritage will be in name only. If they want to quit targeting poor, Black, and Hispanic communities for abortion… well, that’ll be some big news. Planned Parenthood renouncing Sanger is like a pro-choice politician calling themselves Catholic – verbally claiming a position then acting the exact opposite is a farce.

Hypothetically, if Planned Parenthood was truly repentant, why stop at one New York abortion facility? Sanger’s name and likeness are displayed at various places all over the country. She has a statue at the Smithsonian, a bust at the Old South Meeting House in Boston, various streets nationwide, and more. If we, as a nation, are jointly working to eradicate all ties to racism, Planned Parenthood should be leading the reparation-style charge to erase their founder from places of honor. 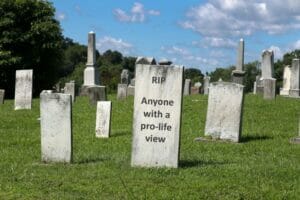